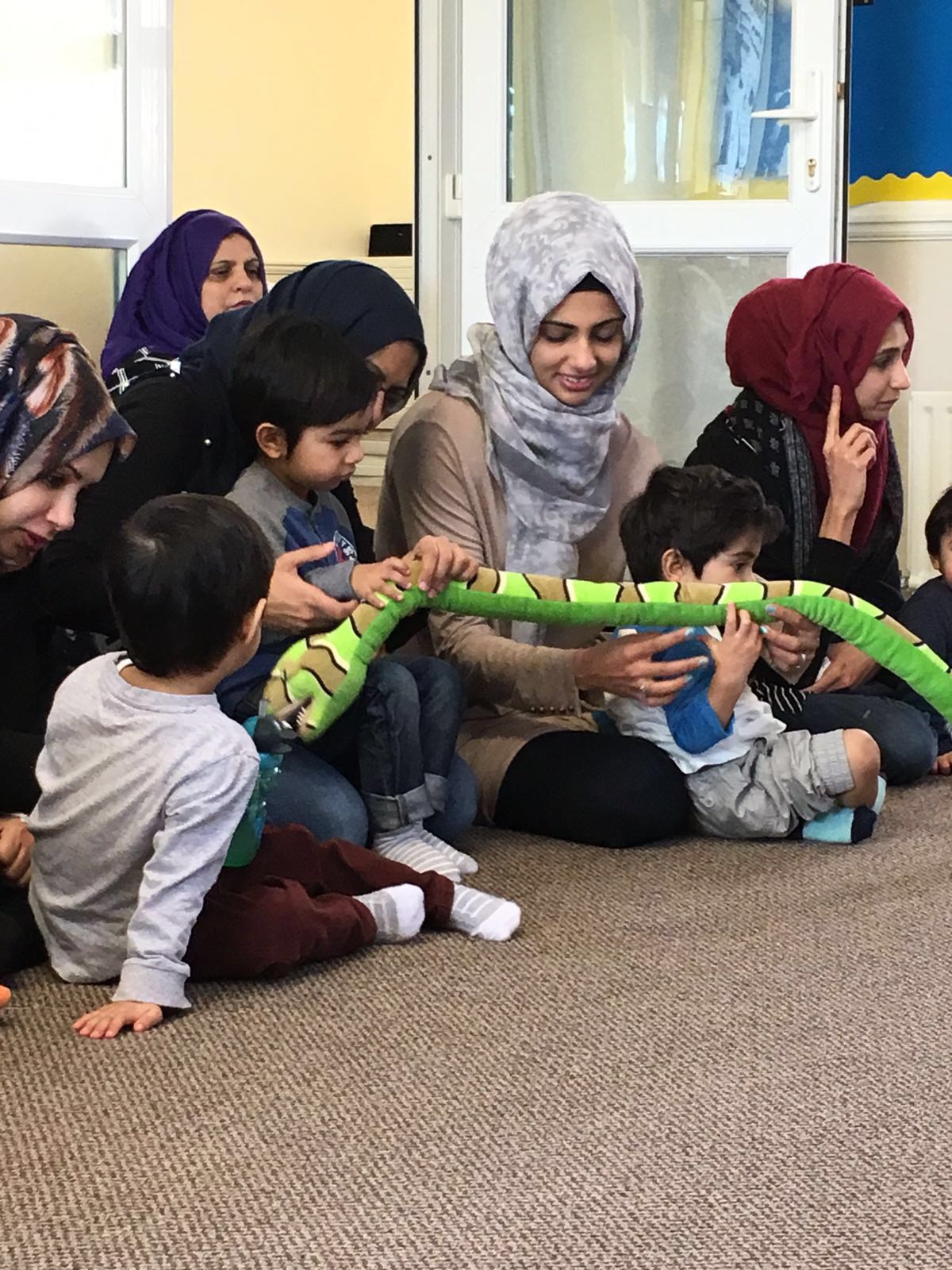 Animals in the Quran Activity Day

On Tuesday the 22nd of March we held an event for the under 4’s on Quran teachings. This first session was teaching them about Animals in the Quran.

MashAllah we had a great number of children sign up for the event.

We began by singing our salaam alaikum song, and then introducing our Amina and Yousuf dolls. Yousuf told the children that he was going to sing them a song and they had to guess what the topic of the day was. We all sang Old Mc’Donald and the children guessed we were talking about animals.

Next we did circle time where the kids had to sing “what’s in my bag’ and a few lucky children got to come up and pick from the bag. Inside they found different animals mentioned in the Quran! Whales, cows, horse, pig, spider, elephant etc. We made the animal sounds and learned the Arabic names for the animals.

To get the children moving, we did a little physical dance where the children got up and acted like the animals through song – they loved this!

After that we broke for our arts and crafts activity. The children used all the crafts they were given to create either a whale, ant or elephant paper plate. They came up with some super art work.

To end it all we read a story on animals in the Quran and sang our fiaminallah song.

The children seemed to really enjoy the session and learned a lot.

To view the pictures, see: http://childrensislamiclibrary.com/photo_gallery_view.php?id=30 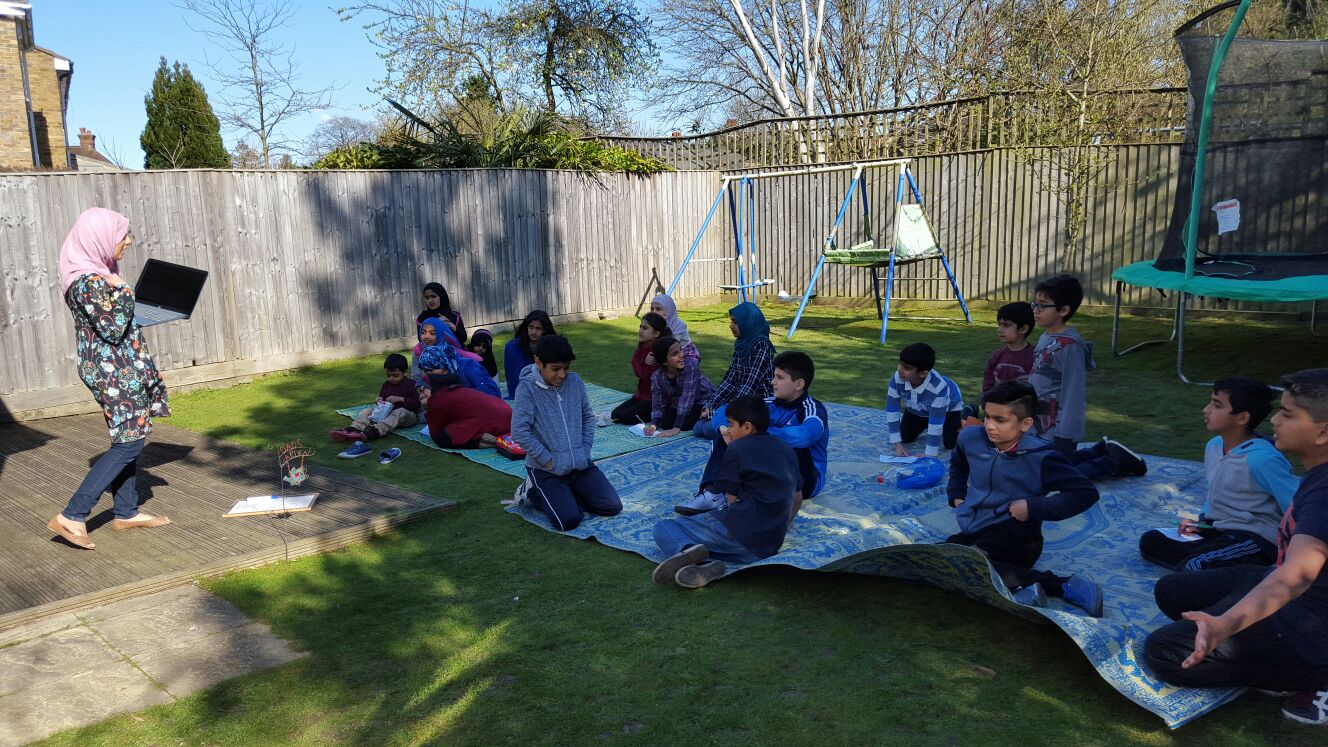 The Children’s Islamic Library held a Science and Islam day for children ages 7 and older. Alhamd we had a full turn out (due to space issues it was capped at 20) – and they had a busy 2 hours of fun and learning!

It began with them forming into teams, which were named after famous Muslim scientists. They then each received a pack of miscellaneous information on these scientists which they had to order and match. The focus was then on one of these scientists in particular – Abbas ibn Firnas, the first man to try to fly. After discussing more about him, the children then went on to try and create their own flying machines – made out of recyclable material.

The teams each presented their gliders to the group, explaining why they had chosen to make what they had, and were peer-marked on them, including appearance – I loved the finishing touches they put on! Now came the test! To see whether it would fly, they dropped their gliders from a height – each flight was timed, and points given to the teams accordingly. We even had one fly all the way to the end of the next door neighbour’s garden!

After a snack, the day was topped off with a science quiz, where the children answered Islamic and general knowledge questions on science – it was very interactive with them having to physically demonstrate some answers, as well as solve some anagrams to get to the right answer. These were totalled up and the winners announced! They were all winners, in my opinion!

A special thanks to the lead organizer who volunteered her time and energy to plan this Science and Islam day!

The Children’s Islamic Library help a Yoga and Islam Activity Day. The event was attended by over 70 children (not including under 4s!) – we raised £213 for charity :).

The children attended their yoga sessions, where the instructor linked it in to Islamic stories and movements. They also made crafts about Bibi Zainab (as), played with the Islamic games available, read books and we finished off with Story Time at the end. 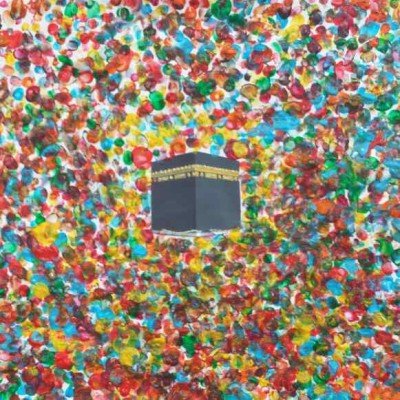 Alhamdulillah, yesterday we got the opportunity to go into our children’s school and have a Hajj Activity Day with them. Each class (from Year 2 onwards) came into the hall and we had about 40 minutes with them.

The children gathered around the Kaaba in the centre. After a quick introduction to how Muslims greet each other, and that we were there to show them what we do in Hajj, the children were divided into groups of five and went off to different stations around the hall! 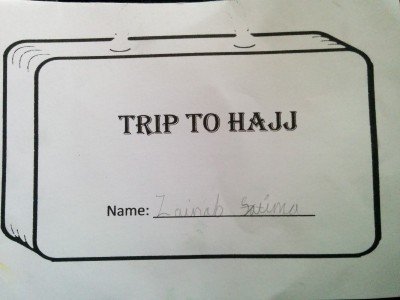 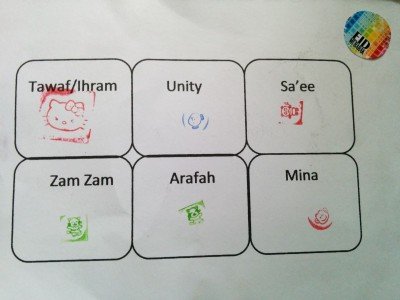 IHRAM/TAWAF: The children tried on clothes that Muslims wear – as well as ihram (towels), there were abayas and dishdashas and namaaz chaadars. They were told about the symbolism of the colour white, and how in ihram everyone looks the same, no matter what profession or how rich or poor someone is. The importance of being extremely careful in ihram was also emphasised (no hurting anyone, lying, stealing, etc), and how this should ideally be how we are when we return from Hajj also. 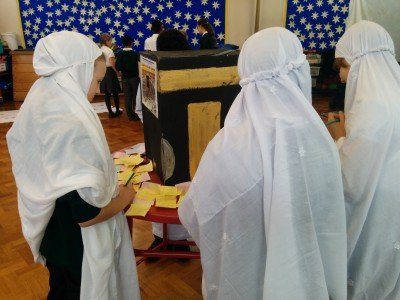 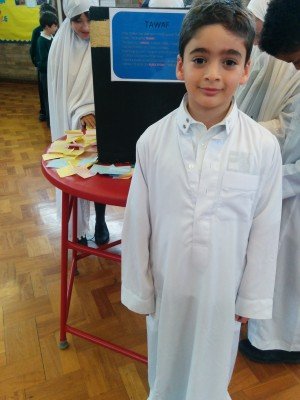 The children were then taken to the Kaaba and told to think of (and write down) a wish that they would like to make, because your first wish when you look at the Kaaba is granted, if it is good for you. These were stuck around the Kaaba. 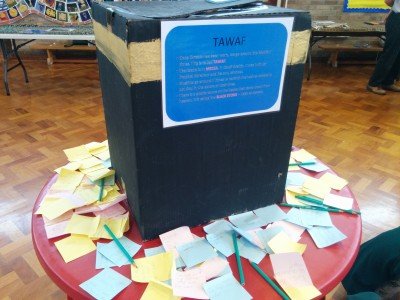 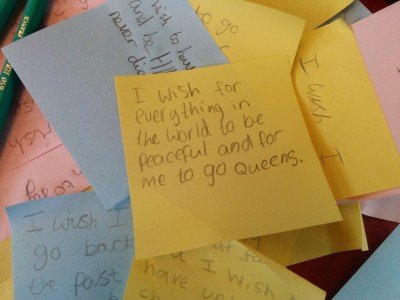 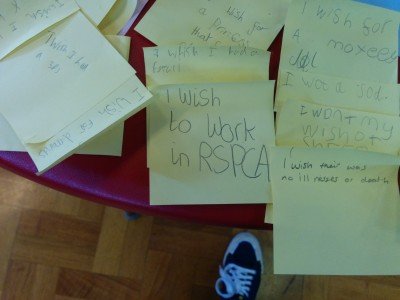 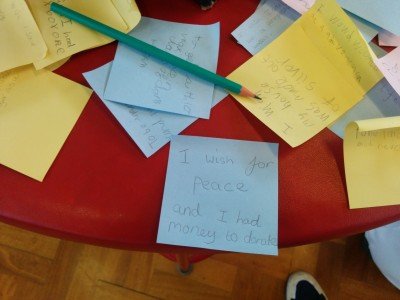 They were talked through how the Kaaba was made, and how tawaf is all about making God the centre of your life – and then they went around the Kaaba 7 times! This was fun for all, even the year 6’s!

SA’EE: The story and role of Bibi Hajar was told here, and also the role of women in Islam. The fact that one of the big parts of Hajj was following the footsteps of a woman was emphasised.

ZAM ZAM: At this station, the story of zam zam was shared with the children – the story telling was captivating . The children were told the health benefits of zam zam water, and encouraged to try some. The sincerity with which they did so was awe-inspiring to watch, with some praying to be healed as they did so. This proved to be one of the most popular stations! 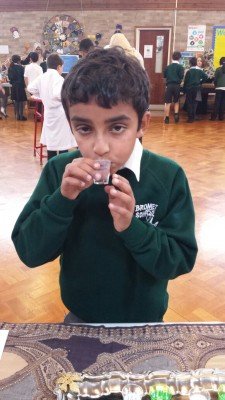 ARAFAH: Here a beautiful corner was set up under a parasol with a lovely rug, pillows and kid-sized musallas. At this station, as well as learning a little about Arafah, children were encouraged to think about what good habits they wanted to inculcate in their lives. They then wrote this out on post-it notes and put it in a box of sand. 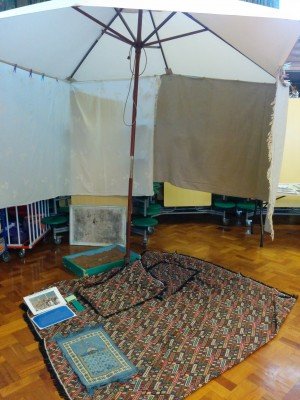 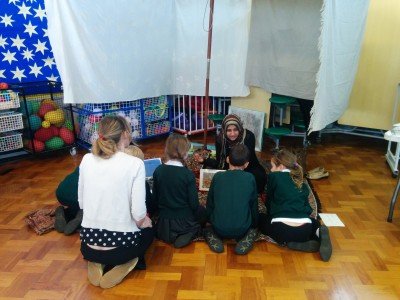 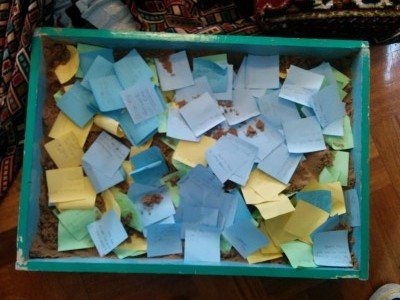 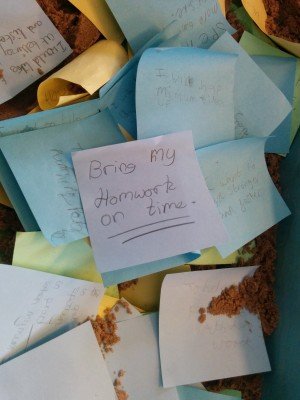 MINA: Here children thought about the bad habits they may have. They wrote it out with marker on a piece of newspaper, scrunched up the paper and threw it into a bin, saying ‘Sorry’ as they did so!

UNITY: This was definitely one of the most popular stations also! We were lucky to have local artist Siddiqa Juma – Islamic Art come in and help the children recreate one of her famous pieces of the Kaaba – Diversity. Children were explained the concept of unity in Hajj, no matter what race, colour, language, etc. Each class made an A3 poster with the Kaaba in the middle and fingerprints of each class member around it. Inshallah this will be mounted and placed in the classroom . They also made their mark on a bigger poster which will contain the prints of all members of the school, teachers included! 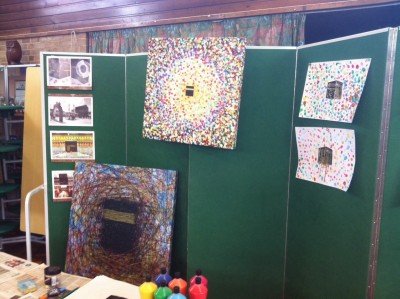 EID: Once stamped, the children got to celebrate Eid! Here they were shown pictures of the different ways children celebrate. They were encouraged to give charity (we had kept some coins ready) and got an Eid Mubarak sticker. They also did a lucky dip and got a treat too! 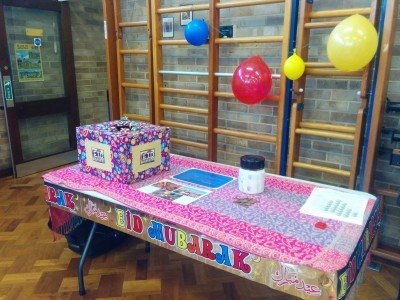 There was also a table with some Eid books, a Quran (which the Muslim children read out to their classmates with pride), and other little Hajj bits and bobs out on for the children to look through. 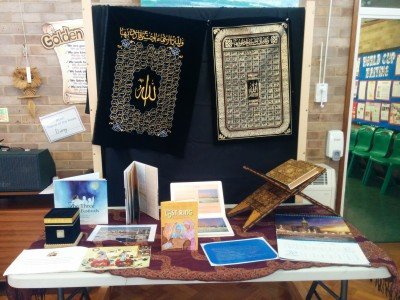 Once this was all done, they had an opportunity to write their thoughts down. It was amazing to hear their reflections. 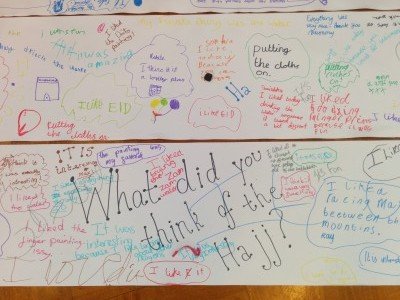 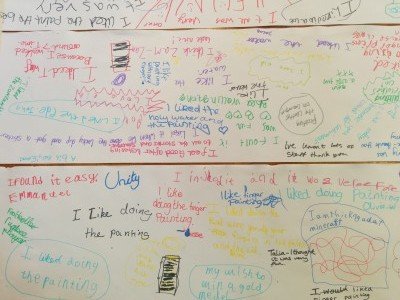 Lastly, we gathered around the Kaaba again to share thoughts on the event. They shared their favourite bits, and some even shared the bad and good habits they had thought of. Before they went off, we had a resounding THANK YOU from each class

Alhamdulillah, both students and teachers alike commented on how great the day was – even teachers of classes who didn’t come in spoke of the positive things the other teachers and students had said. The head and many teachers thanked us for putting this together. A few teachers commented also on how this was exactly what was needed to help the children be more aware and informed, to prevent future prejudices based on ignorance.

A MASSIVE thank you to all that were involved – even people whose children did NOT to the school gave up their free time to come and help out, and we can’t be grateful enough! 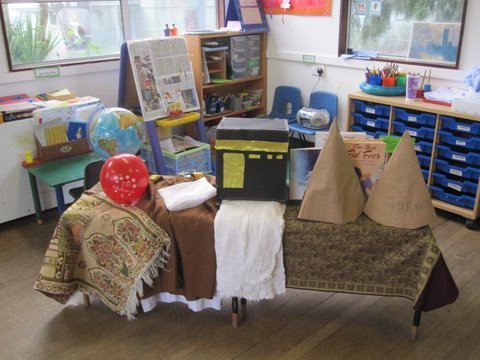 This series shares ideas to make the marking of Hajj and Eid-ul-Adha fun and memorable for our children, as well as spread the message of love and celebration to the wider community about us!

1. Go into school and do a presentation

Most nurseries (especially Montessori/Steiner and the like) encourage parents to come in and talk about Eid. Likewise, some schools also invite parents to come in but if they do not, GO TO THEM YOURSELVES! They will never say no, and most R.E. teachers will even appreciate an expert going in and explaining Eid better than they ever could 🙂

The best part is, you can involve your children in the nursery and school presentations, and they LOVE it! I know mine are already asking me about going in to their classroom again this year!

JUMP at this chance and do it! If you’re stuck for ideas, check out this lesson plan, which has ideas for objects to take in to show, a rhyme to sing and things to do.

Here is one for older children.

And for a change, how about doing a play? We did a play on Hajj at our primary school: The whole school came in to the assembly wearing their Eid Mubarak stickers which we had distributed to their classes earlier on. After a quick intro, the Key Stage Two-ers began their presentation and there was pin drop silence throughout!

Here is the script of the play they performed: https://www.dropbox.com/s/wpctwqy2tgxgg9r/hajj%20presentation.docx?dl=0

Alhamd they did great, right to the very end where they all called out ‘Happy Eid everyone!” Cheers accompanied the applause for them, and Alhamd, the participants were all buzzing after and wearing their religion with pride. 🙂

Their classmates were truly appreciative, especially when we went round and dropped off their Eid Mubarak cupcakes off, with calls of “Thank You!” coming from them as we did so. The teachers and head were all given Eid gifts and Eid cards, and Eid cards were given out by the children as well.

As well as the informal thank yous from the staff, we got a very official looking letter from the school to say the same, and that they hope for more such opportunities for us to share our customs with them! Who can refuse such an invitation?! 😉

Alhamd all in all a great morning with Inshallah many seeds planted in minds, young and old 🙂 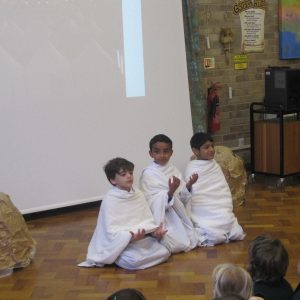 A group of parents got together and planned a whole day of activities for the primary school their children went to. As there is a lot to it, check out the full post on it here.