Ramadan Idea 21: Share Ramadan with those around you through FOOD

by admin | Ideas for Marking Ramadan with Kids, Neighbours, Ramadan 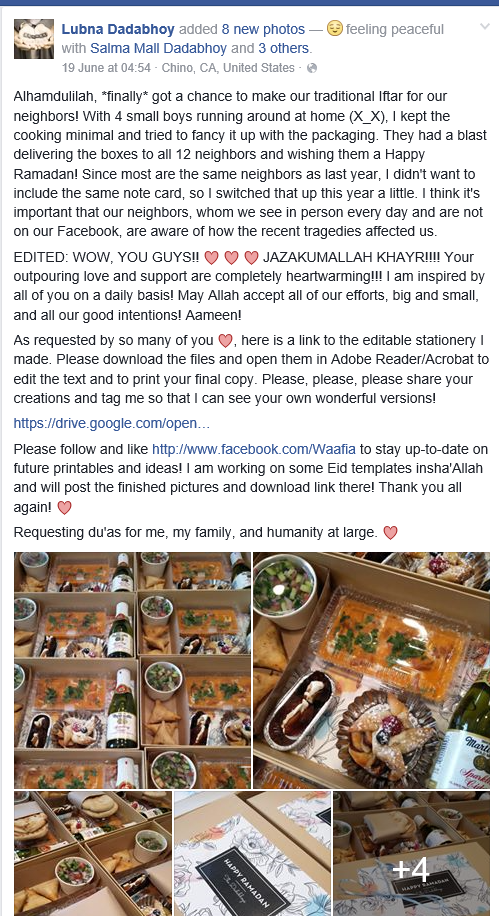 With Ramadan being such a beautiful and blessed month, why not share it with those around you? The children can get involved with the cooking, giving out of food and entertaining! Here are some ideas:

Saw this awesome idea on Facebook and loved it. Building bridges with those around us is something we believe in strongly (thus the neighbour cards/cards for non-Muslims) and boy has she done it in style 🙂 Here is her link to the printables.

***We may not always see the effect but we are having one! Check out this man’s response to someone knocking on his door!

“In light of recent events, I’ve felt the need to share a heartwarming experience I just had with anyone who is willing to pause scrolling for just a minute.

I just had a knock at the door – I wasn’t expecting anyone, so opened the door pretty sheepishly. A lady who was clearly of Muslim faith was standing outside with a carrier bag filled to the brim with containers. Confused, I asked if she was okay – she told me her name, and apologised for knocking so late in the day before explaining that she lived on my road in another flat and was walking round the houses to give people gifts; bearing in mind that I hadn’t ever seen or spoken to her before. She opened her bag and handed me a selection of beautiful smelling food, wrapped in foil with a small note titled ‘Dear Neighbour’, a jar filled with Bombay Mix, and a double-sided letter titled ‘Ramadan’ – picture attached.

She told me that she wanted to share something with everyone on our road to explain what Ramadan actually is for those of us who aren’t aware, and to give us the gift of food at a time when neither her, nor her family, we’re able to eat. The letter detailed what Ramadan is, why it is practiced by followers of Islam, and what the principles of Islam actually are. I had expected the knock at the door to be a disgruntled neighbour complaining about my parking, or god forbid, a political canvasser – *shudder* – I didn’t expect a visit from someone who simply wanted to share community spirit, generosity and most importantly, someone who wanted to actively share the knowledge of a religion which is currently at the center of recent events, and which is integral to the lives of over a 1/6th of the planets population.

Recently there’s been a lot of headlines in the news referencing Islam in relation to the terrible events which are taking place far too regularly. I’ve found it disheartening and disappointing to see quite a few comments online, and quite a few ignorant tweets from moronic individuals which have been aimed at anyone who classes themselves as a Muslim – all because a small handful of barbaric, twisted individuals feel the need to commit atrocious acts in the name of a God they incorrectly believe they’re serving.

Innocent lives have been unnecessarily lost enough times now in this country alone; not to mention the fact that the events which have happened in the UK are more of a daily occurrence for thousands upon thousands of people in less privileged countries around the world – places where the inhabitants don’t have the luxury of safety, emergency services, protection, or shelter. Some people need to be reminded that these attacks have not been carried out by true followers of Islam; these events have been carried out by Extremists who have their own fucked-up beliefs. The people affected most by these events are people within the Muslim community, who have to fight against the claims made by the so-called Islamic State on a regular basis.

Today, I’ve been lucky enough to learn a bit about a religion which I’ve never invested time to learn about. If the c***s who are carrying out these destructive acts had any brains, they’d learn to read and have a flick through the Quran themselves, because as I understand, they’re clearly reading a different book entirely if it’s telling them to go and slaughter innocent men, women and children without any reason or cause. Perhaps they’ve mistaken the Holy Scripture for Mein Kampf?

There need to be more people like my neighbour, because it’s amazing what a bit of good can do in a time when almost everything we read in the news is negative. What an amazing lady.”