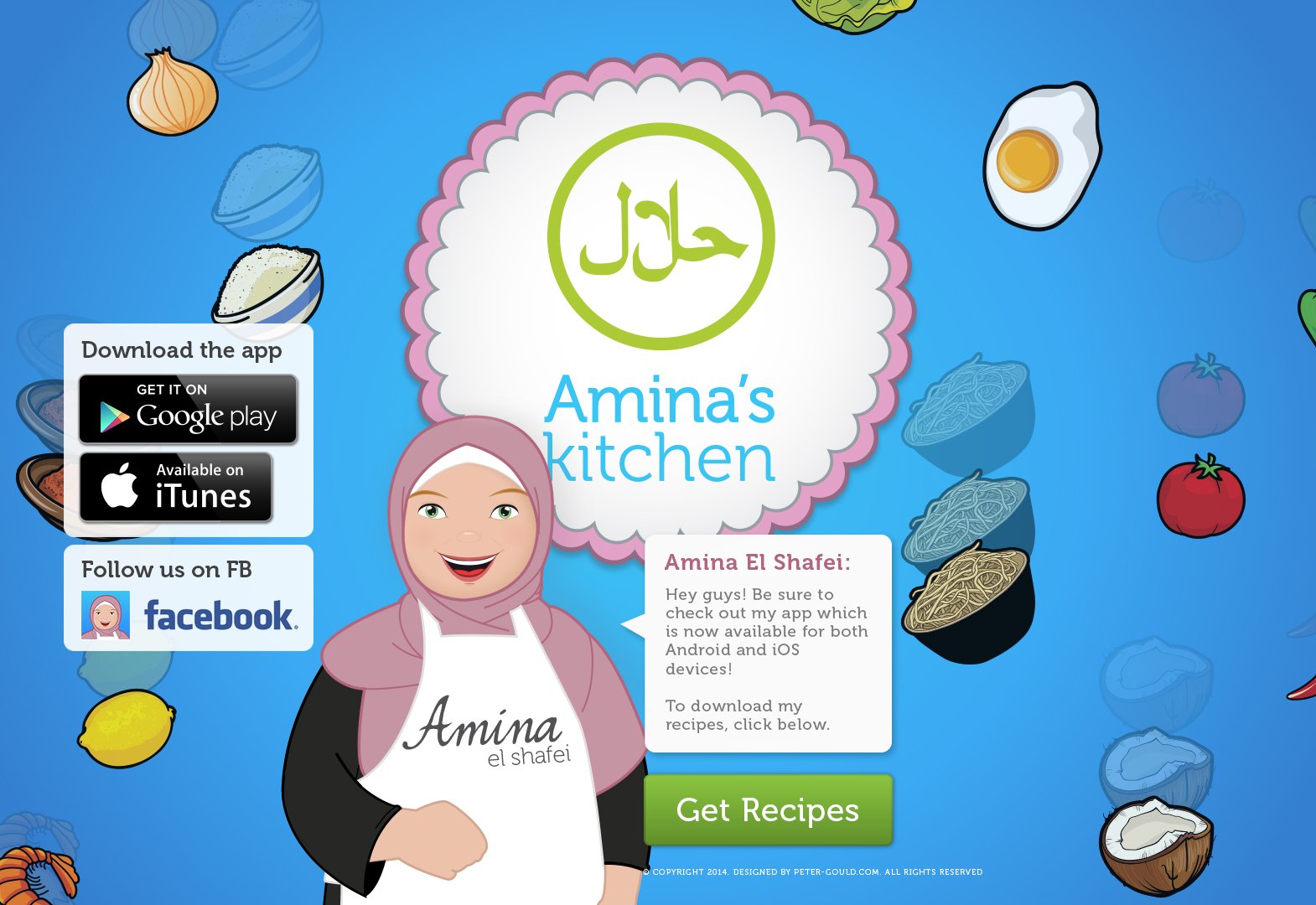 Another App review for you 🙂

Amina’s Kitchen is a great app for any budding young chef in the house!

When you log on, you can go straight to the recipes or click on play for some interactive fun… You are directed to a map where you can choose your destination, and then introduced to various dishes from the region. To get the ingredients, you need to play a catching game – but make sure you stay away from the non-halal ingredients! A great way to introduce children to different regions of the world where Muslims are, teach them about halal and haraam, and introduce them to the world of cooking…

Check it out on:
http://www.aminaskitchenapp.com/

Wednesday – Nouman Ali Khan day!
Check out this short talk on the dangers of social media and our children…

A Day in the Life of Sayyid Ali Khamenei

Remember the letter to the youth by Ayatullah Khamenei? https://buzzideazz.com/ayatollah-khameneis-letter-to-the-youth-of-the-west/
Mashallah – he really walks the talk!

Check this inspiring narration of his day:
A Day in the Life of Sayyid Ali Khamenei
on: January 26, 2015
In: Analysis, Scholars News

Qolam Shahpasandi, one of the guards of Ayatollah Khamenei, shares the following information on how the Ayatollah spends his day:
If I want to explain a typical day of his, all three points that he mentions for the youth are present in his life (exercising and sports, learning knowledge, and taming and purifying the soul). He usually gets up 1 to 1.5 hours before Fajr prayer and preforms his different acts of worship (night prayer, etc). His days are different from each other and are not similar. One day he prays (salat) more, one day he reads Quran more, one day he reads supplications (dua) more, one day he recites more dikr (remembrance of Allah).
He prays morning prayer (fajr) in congregation (jama’at). The smallest size of jama’at is just him and his bodyguard, and the largest population is anybody present in the building. He prays the prayer in his office and everybody that is at work at that time in the morning joins him – whether it’s guards, secretaries, etc.
After morning prayer, three days a week he goes hiking. For at least 45-60 minutes, he spends time going up a trail on the mountain and spends about the same amount of time coming down.
Some of the mountains are further away, and for the hike to not interfere with his work, the time that Ayatollah Khamenei usually gets up for night prayer and doing personal duas will be spent going to the hike as he does his worship on the way. Once he gets to the foot of the mountain, he prays there. At that time, it is still dark and no one else seems to be awake. The hour we set out to the mountain, the sun is not out yet.

On the mountains, Ayatollah Khamenei is typically wearing a turban. It’s not the same turban that you typically see him in and is rather thinner and smaller.
Right after he comes down the mountain 3 days a week, his work in the office starts. The other 4 days of the week, he does exercising at home. He is not the type to leave any piece of work incomplete in the middle. Any work he performs is complete. He knows the principles on how to be very accurate and precise in his job.
After exercising, he comes to the office. He arrives sometimes at 7 am and sometimes around 7:30 am depending on the mountain and the route that was taken. Thus, at 7:00 am or 7:30 am, he is in his office. If he doesn’t have a private meeting, he goes home and eats breakfast with his family. Then, he comes back to the office and resumes his work.
If he has a meeting, it starts with breakfast. If the meeting is scheduled for 7 am, the group visiting eats breakfast with him. Ayatollah Khamenei is at the office until noon prayer. When they recite the adhan, no matter what he is doing- even giving a speech- he abandons it and says let’s go read the prayers on time.
After prayer, he resumes work. If the meeting goes on, lunch is eaten with him and the members of the meeting. If there are no meetings or visitations, between prayer time until 1-2 hours after, Ayatollah Khamenei eats lunch at home and rests (since the distance between his house and the office is 10-20 footsteps). Then, the next program starts around 3-4pm. He comes inside the office and if there is no meeting, he spends time in his library studying.
Any time you see him, he is either saying dikr or reading Quran. It is impossible for him to be in the state of heedlessness for a second. I haven’t seen it. I will give an example. When you are watching him on TV and the reciter is reading Maddahi (eulogies), you will see his hands are by his lips. He does this so that when his lips are moving, it isn’t apparent or obvious to people.

About reading the Quran, he has told us: My children, read the Quran a lot. The Quran is light. Read is immensely. In my youth, I would finish reading the entire Quran every 3 days. Meaning everyday I would read 10 juz. Now there is not enough endurance like before and I am old. From the aspect of my age, status, job, problems at work, and all these issues, I can’t read the Quran like before. I’ve become really distanced from the Quran. It takes me 9-10 days now to read the Quran cover to cover.
Now that he claims he is far from the Quran, he reads 3 juz a day. If Allah gives us special attention in Ramadhan, we finish the Quran in one month and we think we’ve done a lot. We reprimand God that we read the entire Quran and nothing happened to us. We need the reading of the Quran and God doesn’t need it. We are in need of it.
Ayatollah Khamenei has a big family. Him, his wife, and his 6 kids all lived together until the marriages of his kids and now they have all left. All 8 members of this family have memorized the entire Quran. Being acquainted with the Quran means this. You might have heard the voice of Ayatollah Khanemei reciting the Quran but did not recognize it since the radio plays it sometimes. When it is played, since the people don’t even know it’s him, they mistakenly say it is Mustafa Esmail’s recitation.
If you want to act upon Ayatollah Khamenei words and become closer to our Wali, the prescription is what I mentioned. Studying, purifying, and exercising, and after that Quran. Purifying and studying are two wings that take a person anywhere. If only one of them exists, it is dangerous.

If we want to know the Supreme Leader, we should contemplate on getting to know him and everything will be given to us.

Source: yaseen publications
How Rahbar spends his day A must read
http://iawakening.net/day-life-sayyid-ali-khamenei-2/

Wow. I have goosebumps.

Remember the Inspiration series I shared some time ago? Check the first one out here: https://buzzideazz.com/inspiration-episode-1/

Subhanallah, this lady converted to Islam after watching them. So why am i sharing this here?
I think our kids need to know that Allah has put them in this world for a bigger purpose, and to achieve that bigger purpose, they need to develop their God-given talents and use that for the better good.

This is what they did here with the series. There were Muslims that were good at film-making, acting, editing, etc – and they got together and put these amazing different talents to good use. Just IMAGINE their reward in the hereafter!

So, for example, if you’re child is good at art, this is a talent that should inshallah be developed and perfected and then used for Islam, such as by illustrating good quality children’s books! This is just one teeny weeny example…the list is endless!

May we all help our children reach their very best, Inshallah!

Check this out! Islamic Storytelling – touch and read 🙂
Mashallah, so many awesome resources out there these days!